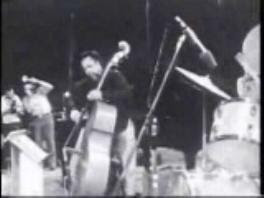 Umbria Jazz is the most important and well known Italian Jazz Festival, that next year will reach its 40th anniversary.
1974 was the second year of life and program was rich and ambitious, spread on different towns

and including many important artists as Gerry Mulligan with Mariam McPartland, Keith Jarett, Horace Silver presenting two hopeful young artists: Tom Harrell and Bob Berg, Antony Braxton, Sam Rivers, Sonny Stitt, the Big bands of Gil Evans and of Thad Jones & Mel Lewis, and Charles Mingus New Group.
This last group was a kind of All Stars, with the leader, playing bass, there were George Adams (ten. sax), Hamiet Bluiett (bar. sax) Don Pullen (piano) and Dannie Richmond (drm).
In the following video it's possible to appreciate the central nucleus of a gorgeous concert of this group, performed in Todi on july 28, 1974 (not 1975 as wrongly written on video; the town is clearly Todi and in 1975 Mingus had only one date in Perugia with a little different group).

The three themes played were:

This about half an hour of exciting music, in front of an enthusiastic pubblic, is a great page of jazz played by five excellent musicians. Unfortunatly only one of them, Hamiet Bluiett, is still in life today.
Pubblicato da Jazzfan37 a 15:03